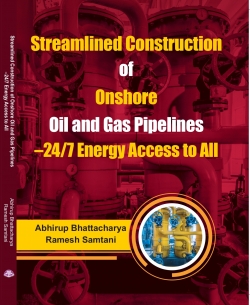 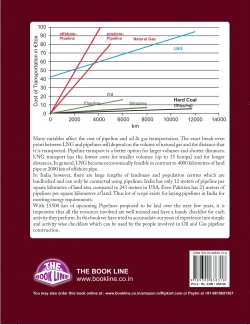 ₹2,479.00
Price includes all taxes.
Add to cart
About the Author
Abhirup Bhattacharya, is a Chemical Engineer from HBTI Kanpur and has a diverse experience of over 29 years in delivering large Projects from conceptualization to design and execution stages in the arena of FSRU based / Onshore LNG Terminals, High Pressure Natural Gas pipelines and City Gas Distribution Network. He is currently working as the Vice President-Fuel Retail & Business development (Oil and Gas) in H-Energy and is a Director on the Board of Ten companies of the Hiranandani Group.
In the City Gas Distribution Arena, he has made his mark in the form of his significant contribution towards developing the various CGD and NG Pipeline Technical Standards and Regulations as part of the various joint working committees constituted by the Petroleum and Natural Gas Regulatory Board of India (PNGRB). Between 2006 to 2012, he was also part of multiple sub-committees of OISD and BIS for their various standards. He had shouldered a number of leadership roles in Gujarat Gas Company Ltd (formerly owned by BG Group PLC, UK), viz. Head of Asset Integrity and Planning, General Manager-Engineering Services, General Manager- Operation and Maintenance, Sr Vice President – Bharuch GA to name a few.
Abhirup specializes in setting in place an Asset Integrity and HSSE culture in CGD Industry and the Maintenance Management Processes setup by him are still being followed in letter and spirit in Gujarat Gas for their various CGD’s. He had also handled the entire gamut of technical operations related to Business Units & Profit Center focusing on all aspects related to Business Process Mapping, P/L Follow-ups and Process.
Between 2004-2007 and again between 2008-2010, Abhirup had the additional responsibility as the Management Representative (MR) for ISO 9001 and was instrumental in rolling out the Integrated Management System.
Abhirup had also played a key role in ensuring a robust SAP driven Preventive Maintenance System which led to an Uptime of 100% across the vast network of Gujarat Gas. He had also led the implementation of a Predictive Maintenance Management System for the Terminal Compressors and CNG Compressors.
He has also authored three books titled- “City Gas Distribution the Transformation Catalyst for India’s Energy Ecosystem”, “Innovative Approach towards Operationalizing the City Gas Distribution Network” and “Regulatory Conformity & Audit of Oil and Gas Installations – A Small Investment for a Rich Future”.

Ramesh Samtani is a Civil Engineering (Structures) post graduate, Master of Business Administration with specialization in Human Resource, a PG Diploma in Computer Applications and Diploma in Financial Management.
He has about 40 years of experience in Energy and Oil & Gas Sector which include Operations, Maintenance, Project Development (Oil & Gas Pipelines), Contracts & Procurement including Legal aspects of Pipelines/CGD Networks, Corporate Planning & Business Development (Exploration & Production) in Indian Oil Corporation Ltd., in Planning Commission (now NITI Aayog) both in Project Appraisal of Industrial Projects & Policy Formulation for energy sector and on preparing regulations & technical standards in Petroleum & Natural Gas Regulatory Board(PNGRB), in various capacities. He has led large teams in various functions and has a high level of proficiency in cross functional management, team building, training, motivation and boundary management with external stakeholders.
He has good exposure to the pipelines and City Gas Distribution (CGD) Network and specialises in making policies/regulations pertaining to CGD and hydrocarbon pipelines. He has made significant contribution in developing the various CGD and oil & NG Pipeline regulations & technical standards & specification including safety standards as part of the Petroleum and Natural Gas Regulatory Board (PNGRB) of India. As part of IndianOil he headed Northern Region Pipelines which included product, Crude Oil, LPG, Natural Gas, Naptha, ATF pipelines. He was responsible for operation and maintenance including construction/laying of pipeline and providing connectivity to the upcoming CGD networks.
In addition, he had been a speaker in various programmes conducted by the Institutes like MDI, UPES, DTU, IIM Kolkatta etc; and have been a resource person for IndianOil apex level programmes. He believes in developing people by sharing knowledge and experience. He has written various articles/papers in in-house journals/magazines of IndianOil. He has widely travelled in India and abroad for attending seminars and business meetings. Further, he has authored a book in August 2019 titled “City Gas Distribution the Transformation Catalyst for India’s Energy Ecosystem”, a second book in February 2020 titled “Innovative Approach towards Operationalizing the City Gas Distribution Network” and a third book in September 2020 titled “Regulatory Conformity & Audit of Oil and Gas Installations – A Small Investment for a Rich Future”.

About the Book
Many variables affect the cost of pipeline and oil & gas transportation. The exact break-even point between LNG and pipelines will depend on the volume of natural gas and the distance that it is transported. Pipeline transport is a better option for larger volumes and shorter distances. LNG transport has the lowest costs for smaller volumes (up to 15 bcmpa) and for longer distances. In general, LNG becomes economically feasible in contrast to 4000 kilometres of land pipe or 2000 km of offshore pipe.
In India however, there are large lengths of landmass and population centres which are landlocked and can only be connected using pipelines. India has only 12 meters of pipeline per square kilometre of land area compared to 243 meters in USA. Even Pakistan has 21 meters of pipelines per square kilometres of land. Thus lot of scope exists for laying pipelines in India for meeting energy requirements.
With 15500 km of upcoming Pipelines proposed to be laid over the next few years, it is imperative that all the resources involved are well trained and have a handy checklist for each activity they perform. In this book we have tried to accumulate our years of experience into simple and activity wise checklists which can be used by the people involved in Oil and Gas pipeline construction.
© 2016, bookline.co.in. All rights reserved.
Website designed by Infomedia Web Solutions